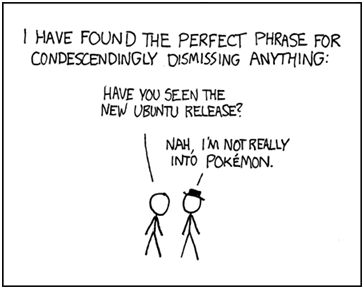 Now this one is more of my personal POV and rant over the internet. Here i shoot.

Ubuntu is like the most used Linux OS or a distro out there hence has a huge market share in the so called free and open source community. So in my opinion i coin it as the Windows of Linux or of Gnu Linux. For your information Linux is just a kerenel and Gnu is the userland of softwares and other things around it.

The Company backing this is you might have heard this name it’s Canonical from UK and it somehow and somewhat advocates Closed source software. Now this might not be relavant but let me tell you some of the moves Canonical has made in the past are quite pointing to restrictions to the code it conducts and things which they have announced in the past. Let me jot down here below one by one.

The famous so dubbed spyware which was coined by Sir Richard Stallman the founder of free software movement in the early 1980’s. According to this the apps which came preinstalled on Ubuntu where actually tracking users data. There where cookie tracking and other stuff’s, and yeah it was Amazon app which was the main culprit and Canonical did take it down post 16.04 LTS but the residue remains on old still 5 year old update supported LTS versions.

Then came the Ubuntu Cloud or the formerly known as Ubuntu One. Now this was considered a threat by many as any form of cloud storage is privacy compromise and the open source community when all guns ranting over the world wide web.

Post that there came Ubuntu Landscape service which was not for the every Tom, Dick and Harry out there but was targetted to Server versions instead and again this fueled controversies. Again in all the above scenario Mark Shuttleworth the founder of Ubuntu OS and now the CEO post Jane Sielber, the famous person(Mark) indeed to go to space by all his moolah.

The latest thing which comes into the picture is Snap package format or Snapcraft, developed in house at Canonical is again has roots which are closed source in nature and are non-free in Linux community terminology.

Hence all these bad decisions which make a person like me more deviated from this distro and again this all started when Gnome 2.32.X was ditched in late 2010, i switched to Linux Mint and somehow became a distro hopper. The point here i am trying to make is even though Ubuntu was good at an initial stage but then as mentioned earlies they got into experimenting business as seen with Unity which was ditched again post 18.10 and somehow the display server Mir was invented to replace the age old X Server.

So these are my thoughts which where mentioned above in a polite way after using Ubuntu since 9.04 which i liked the most, but let me know if you have any other things in the comment section below.

One thought on “Reasons to Hate Ubuntu”